Most traders have heard the old saying about “Let the trend be your friend”. In these days we see a fantastic example on how this old saying is still very much relevant in all markets.

All you have also heard about Bitcoins. And I see discussions all the time about Bitcoin bubbles, how far the price can go and if the price should be zero or a million USD.

But to a trend follower these discussions do not matter at all. As I wrote a couple of week ago I had entered into my first Bitcoin trade. But I had no idea where the should go. My trend following method just indicated the beginning of a bullish trend so I took the trade.

I’m still long BTC and I’ll stay long until I get my exit signal. The moment I get the signal I sell. I’ll sell even though all the Bitcoin experts in the world are screaming “buy”. This is the essence om trend following, to follow your method with a high degree of discipline. 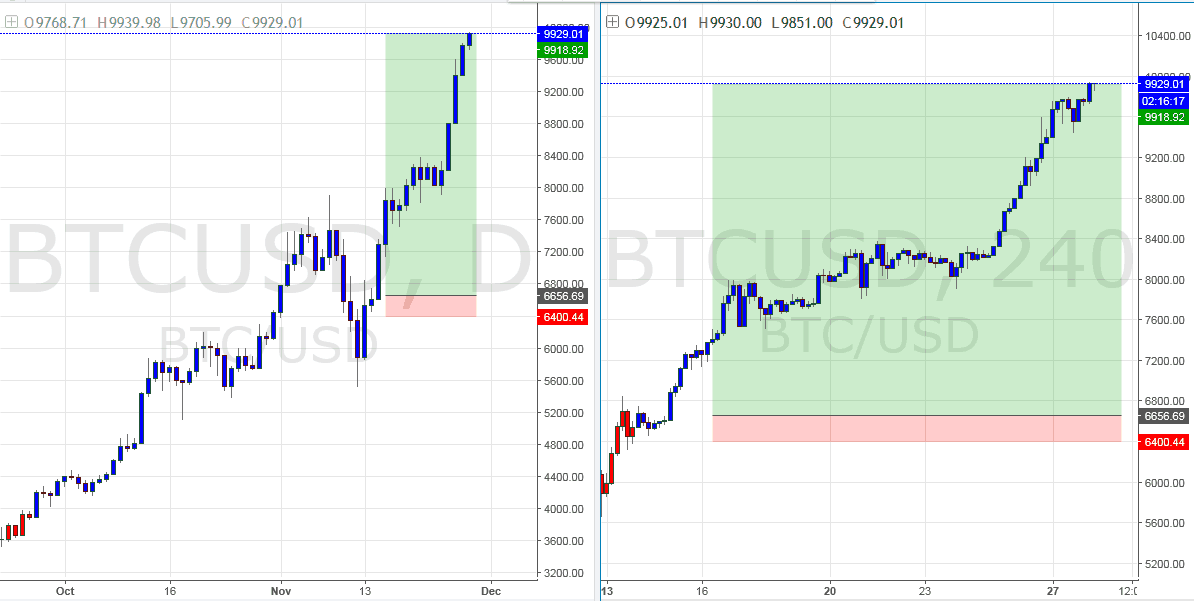 You could easily be impressed by this Bitcoin trade, but I could just as easily have shown you 5 trend that ended in a loss. Because the core of trend following is also that you will have a lot of small losers on the way to finding that one large winner. Right now my bit coin trade is up around 12,5 R (12,5 times my original risk) which means that I can take 12 losers in a row now and still end up with a tiny profit.

Is it too late to go long in Bitcoins?

I get this question about 10 times per day and my ansers is: It depends….

Right now I wouldn’t enter if I weren’t long already. I would wait for a retracement and a new long signal. And I would prefer not to buy straight into the 10.000 level where I assume we’ll see some take profit orders come in.