In the last article we reviewed the trading style Trend following. In this article we will look at the opposite, namely Mean Reversion trading.

In this article we discuss the following:

What is Mean Reversion?

We often see that instruments move away from their average at breakouts, but after some time they move back to the average.

In the example below we have EURUSD on a daily chart. Here I have added a 50-point simple moving average and marked all times the price has returned to the average after a breakout.

There are many daytraders who trade with the trend. It’s also something I personally do, but I have to say that I usually feel most comfortable to go against a trend far beyond the average of the price. However, there are several aspects of Mean Reversion Trading, and you can easily burn your fingers by this trade style. Because we can see that the price often tries to return to the average, but fails several times. Therefore, you can not just sell, just because the price is far above its average. You must therefore have a solid strategy and have clearly defined what The Mean really is.

Why do you trade Mean Reversion?

Before we can look at concrete strategies, we must first figure out how we define “The Mean”.

How do we define “The Mean”?

There is no definite and unambiguous answer to which parameters the average is to be calculated from. The 200-point moving average is as correct as the 21-period. Likewise, VWAP may in some cases be a truer form of average. Therefore, if you are going to trade the Mean Reversion setups, it is important that you consider what average you want to use (slow or fast). It has something to say, especially in relation to the trade frequency and probably also your win-rate and risk-to-reward ratio.

A good indicator that many people use for the Mean Reversion daytrading are Bollinger Bands.

In short, Bollinger Bands consists of three bands in the form of a 20-point moving averages, as well as two outer lines that are two standard deviations away from the 20-point moving averages (these are the default settings, but can of course be changed). One idea for a strategy is to use the Bollinger Bands indicator in conjunction with a price-action setup. For example, you can use 2 Bar Reversal as entry. We have described this strategy in this article.

Below is an example of this particular strategy. 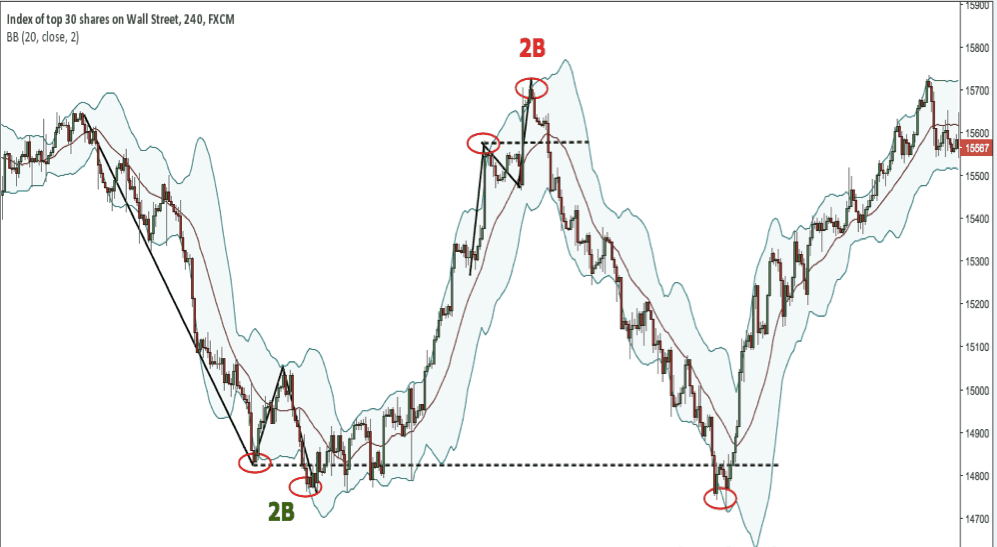 An important thing to mention in relation with Mean Reversion daytrading is that you often do not look for a definite trend reversal, but just a correction back to the average.

That’s it for this introduction to Mean Reversion trading. If you have not read our article about the reverse trading style, Trend Following, you can do it here. Do you have any questions or inputs, then throw us a comment below.