Is Bitcoin dead? - DaytraderLand - Learn How To Make Money on Daytrading

I have been asked the question in the headline several times over the last weeks. It Bitcoin dead?

First of all I will say that you are asking the wrong guy. Since I didn’t even see the Bitcoin rise comming I might not be the right person to ask if it’s now dead. But now that I have you here, let me give a couple of comments on the market in general.

Let’s take a look at the daily chart of Bitcoins the last couple of months. 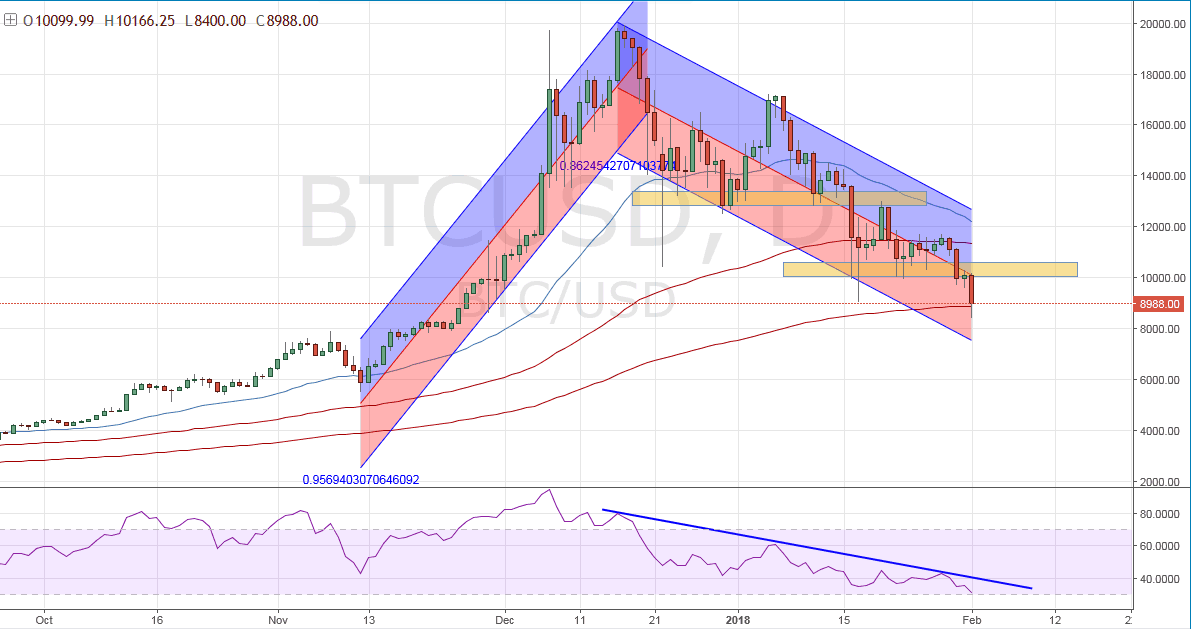 As you can see I’ve put a couple of regression channels in to see what the statistics have to say about the trend direction. And it’s obvious right now that the trend is bearish. Bitcoin has broken all larger support areas and it’s moving down with great force right now. The first clear sign of a break down came around 15.400 and since then the price is almost cut in half. But this is just historical fact. It would of course be more interesting if I could predict where it would go from here.

But as I mentioned earlier I really have no idea. But we can look a bit more on the earlier crashes in Bitcoins and maybe we get a bit wiser from that. Here we see the Bitcoin price in a logarithmic scale where all movement are measured in percentage size. I have mentioned this before, that when we are talking like a wild and volatile instrument like Bitcoin we have to use log. scale to be able to compare the price swings from a couple of years ago with the swings today. 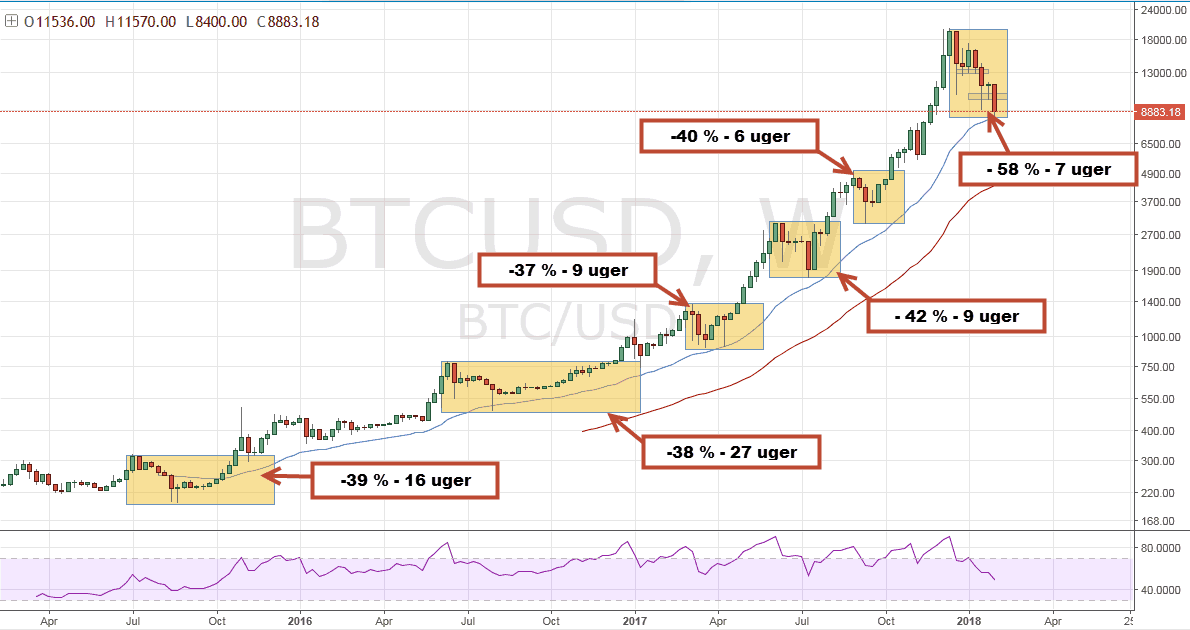 Since the end of 2015 Bitcoin has had 6 major down swings (inluding the present crash). These swings have forced the price down between -37% to -58% and the decrease in price has lasted from 6 to 16 weeks (“Uger” in the chart is danish for “weeks”) before a new higher high has been made.

With every single down swing the media has declared Bitcoin dead, and every single time it has turned up and made new record highs. The present crash of -58% is the worst we have seen the the last 2½ years. But if we look back to 2013-2014 we had several crashes of 50-80%. So we can see that these massive price movements is a natural part of the Bitcoin price movements over time.

If we should look for differences between the present down swing and earlier ones we could point towards the general investor psychology. In the earlier crashes the Bitcoin hasn’t been as much hyped in the media as it has been lately. Just before the new year 2017/2018 you couldn’t open a newspaper or watch the news on TV for 5 minutes withous hearing about the rise in Bitcoins.

This menas that a whole lot of ordinary people without any former experience in investing have jumped the “get rich quick train”. And these unexperienced investors are now seeing a large portion of their account wiped out and gone. These people will probably be selling into this present crash which might make the swing down even more severe.

So basically I have no idea where we are going from here. But we are in a very well established bear trend and would have to see the price rising to at least 12-13.000 before I would start trusting a new bull trend.