In this follow-up to the article on risk management with R, this article is now about the Dynamic R. concept.

It is a concept that I have become more aware of in the last five months, and which I increasingly take into account in my daytrading and swingtrading.

In this article, we will explain the Dynamic R concept and explain how it can be used in daytrading practice. At the same time, we will describe why there is nothing called a “free trade” simply because you no longer risk any of your capital, as well as at the end of the article, why it does not make sense to have your stop-loss set at breakeven.

Dynamic R only makes sense to use if you have a profit target in its trade. Otherwise, it becomes difficult to measure the running R. Therefore, the article is mostly targeted towards those of you who trade with profit targets.

You can become more profitable in your daytrading if you use the Dynamic R concept in conjunction with a sensible trailing stop-loss strategy.

Even if you are profitable already, you can use Dynamisk R in your strategy and expect to increase its overall positive expected value in your daytrading.

Unfortunately, we see many daytraders who take great trades and call market trends correctly. But when the market goes so far in their favor, but does not fully reach their profit targets, they end up giving a big part of the profits back because they are then stopped out at breakeven.

What is Dynamic R?

There are many who look at the concept of Risk-to-Reward as something static. Thus, as a constant, that does not change throughout the whole trade.

A lot of daytraders only consider their Risk-to-Reward when they enter the market and forget about it afterwards. But it’s a mistake as R evolves constantly as the market moves.

The risk of a daytrade is not static but dynamic.

A simple example of risk management

Now let’s assume that the trade is going in our favor, so we’re now up with 75 points. Since we have not moved our stop-loss yet, we currently have an R of 0.2 because we both risk our 75-point gain and the 50 points that are the distance to our initial stop-loss. We therefore have a total of 125 points risk, but with a profit target, which is now only 25 points away from the current price.

Now most people think that they would never ever do because they would have moved their stop-loss up to eliminate the risk (also known as a trailing stop-loss).

So, let’s assume that we move our stop-loss up to the starting point of entry in DAX to ensure we get out at breakeven. Unfortunately, we do see a lot of people who do, and below you will understand why we think that you should ideally forget the term breakeven when you’re a daytrader.

Our R has now evolved to 0.33. A bit better than before, but still a relatively low R, which requires a very high win-rate to be profitable.

Even though there is no possibility of moving the stop-loss to a reasonable point, many will probably hope that the price will hit one’s profit target.

Here it becomes interesting. If you closed the trade and asked the same people if they wanted to enter the market with the same profit target and stop-loss, most of them probably would answer that, of course, they would not do so with such a low R.

But why do you accept the low R, just because you’re already in the market?

The problem with the term breakeven in daytrading

There are probably some of you readers who know the feeling of moving your stop-loss to breakeven, so you’re guaranteed not to lose. It feels quite comfortable as you can no longer lose any of your own capital. I know it myself and have previously done exactly the same.

However, there are several problems with moving the stop-loss to breakeven:

But what should you do?

How to use Dynamic R in practice

Let’s get back to the Dynamic R concept again.

I discourage you from being in a daytrade, where one’s R is less than 0.4.

I’ve determined that number based on my own strategy and statistics from my trading journal. For you, the boundary might be another – and significantly less.

Of course, like all other daytraders, I would like to see my trades reaching their profit target, but I do not mind closing a trade early if my R on the way comes down to an unacceptably low level, and at the same time I do not have a logical place to move my stop-loss to.

Tradingview is a practical tool for measuring R

Personally, I use Tradingview to create charts. They have a small tool where you can quickly calculate your R at any given time.

Now, it’s not that I calculate my R for every tick every time the market moves, but I do it when a candlestick closes. It is very rare that I make decisions on open candles. The exception is if the market has hit my profit target, but for one reason or another I have not been filled. Then I close the trade immediately.

The R gets worse the closer you get to your profit target. Therefore, at the start of the trade it is not relevant to look at R, as it is probably still at the acceptable level. It’s only when the price is approaching the profit-target that I really begin to keep an eye on it.

Dynamic R should be combined with trailing stop-loss

I use Dynamic R in conjunction with my trailing stop-loss. If at any time there comes a huge candlestick that closes very close to my target (as in the example below) and at the same time there is no logical place to move my stop-loss to, then I usually close the trade. 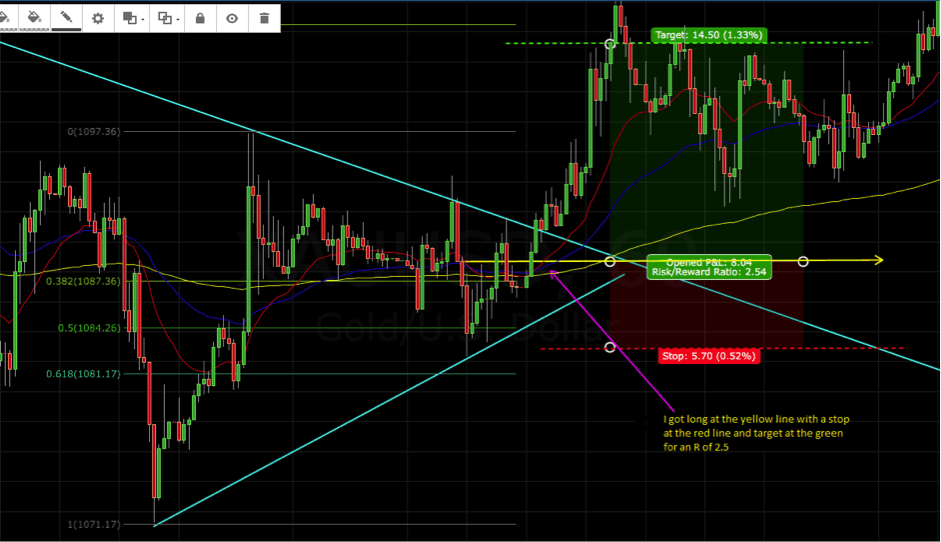 The trade went quietly in my favor. At one point, there was a big green candlestick that closed 17 ticks away from my target. The only logical place I could put my stop-loss would be under the big candlestick, but even there I would have an R of 0.25, which is unacceptably low for me. I closed the trade manually and returned 2.25R in profit.

The price ended up hit my target a couple of candles after, but unfortunately it’s far from always the outcome.

Another example from a gold trade a week later

In this situation, you can easily end up giving back the full profits, just because the price does not exactly hit your profit target.

It’s almost the same setup as before. I buy when the price goes up through the yellow horizontal line. Profit target is a Measured Move. To start with, I have an R of 2.8. 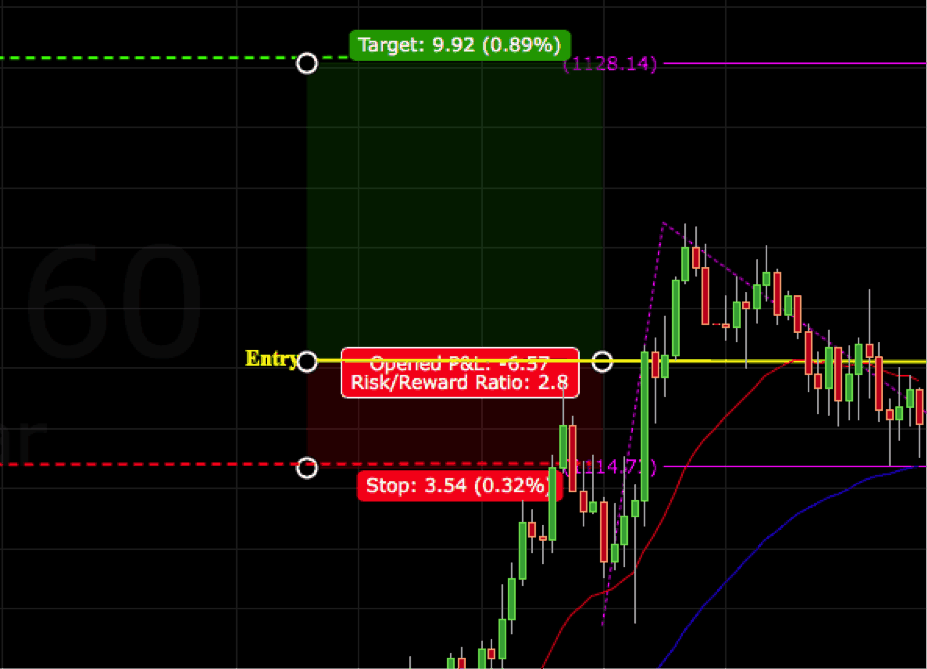 Then a big green candlestick appears in my direction, and the trade is almost as good as secured only 6 ticks away from the target. In that situation, you can either choose to close the trade early, or hope that the price hits the target on the next candle.

Suppose we move our stop to breakeven as we do not want to risk anything anymore. By this time, we have worsened our R, which has now dived down to just 0.08. But we hold on to the trade as we want to hit our profit target. 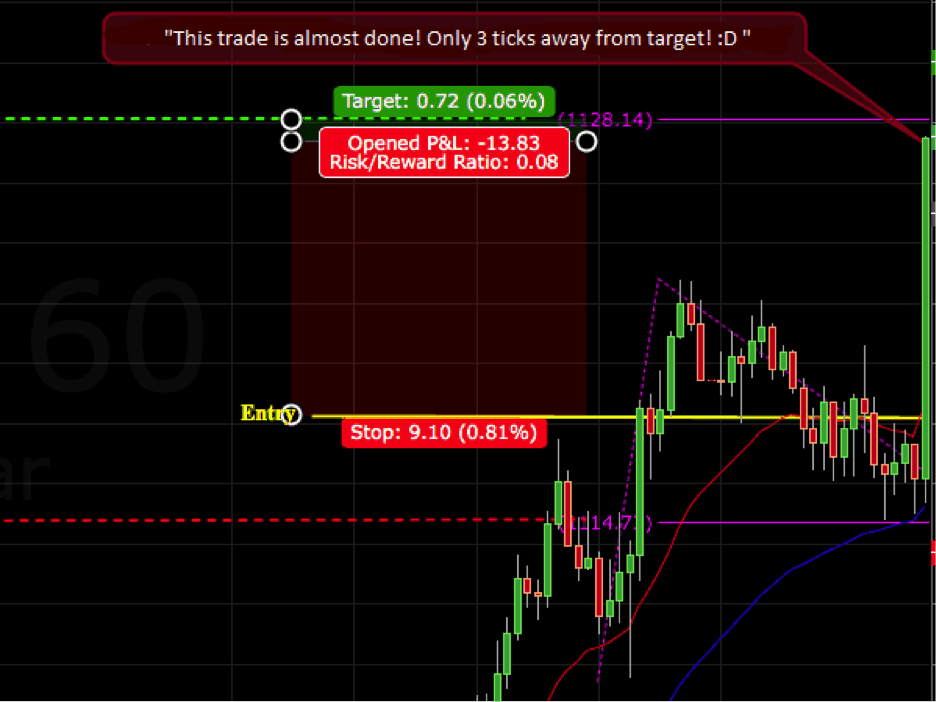 What happens next is one of the worst things that can happen to a daytrader. The trade turns around and ends in the breakeven starting point.

I personally closed the trade when the green candlestick closed and would have been out with 2.6R in profit.

Does Dynamic R damage the equity curve in the long run?

Now it is obvious to conclude that if you often close your trade before the profit target has been reached, you will definitely lose some profit in the long term.

The answer must be found in your trading journal. But, from my experience, that is not the case. On the contrary, I have a big advantage of doing that.

The example of John and Tom

Let’s take an example with two daytraders, John and Tom. They take exactly the same trade with the same profit-target and stop-loss.

The only difference is that John is aware of the concept of Dynamic R and therefore always closes his trade if R falls below 0.4. Tom, however, always keeps his stop-loss at breakeven when the trade reaches 1R in profit.

After three trades Tom sits and laughs at John because he is closing his trades early and thus losing the last 10-15 points in profit.

At 4th and 6th trade, the market turns. Tom is stopped out at breakeven, but John closed his trade a little early when he either was stopped at his trailing stop-loss or closed the trade due to a low R. 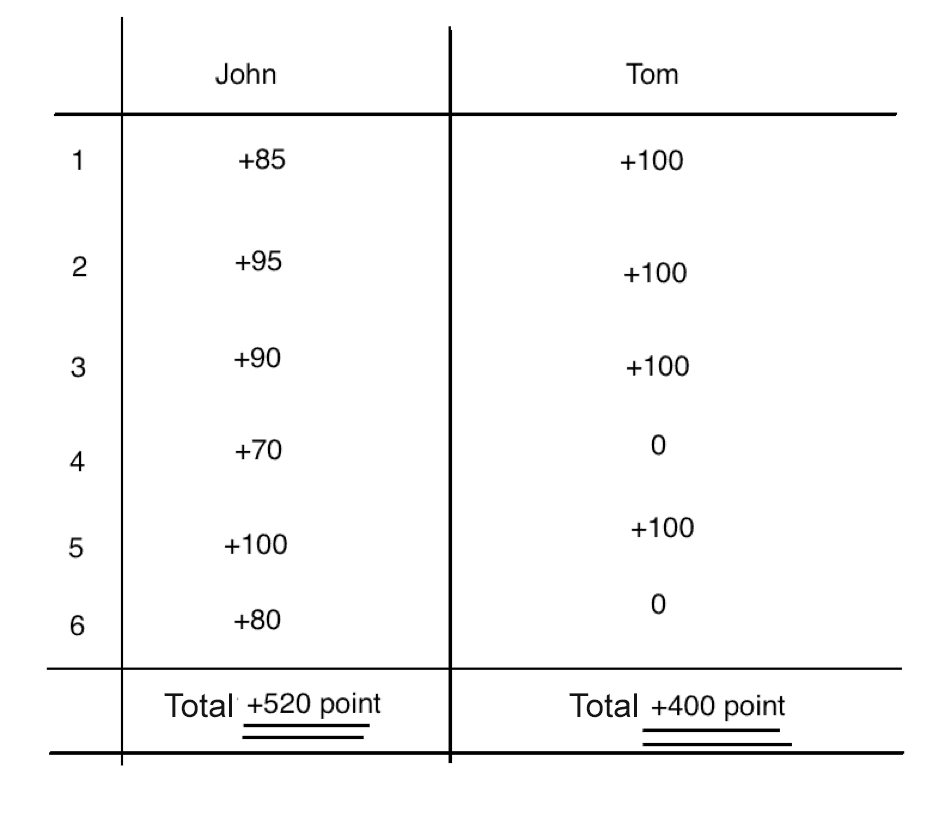 The example is of course set up to prove my point.

I recommend that you go through your own journal (all daytraders should have a journal) and see if you can find a way to trail your stop-loss as the trade goes your way and then combine it with the Dynamic R. It’s personally something that has helped me a lot.

In a later article, I will come across some of the techniques you can use to trail your stop-loss with.

I hope you’ve got something out of the article. As always, I am open to debate and any questions. They can be posted below this article or on DaytraderLand’s Facebook page.