“Survival of the fittest”

Most people know the above quote. It is the world-famous quote from Charles Darwin (1809-1882) who researched the origins and development of the species and in 1859 published his book “Origin of the Species”.

But most do not know that this quote for many years has been completely misinterpreted.

Because when people hear the above quote, 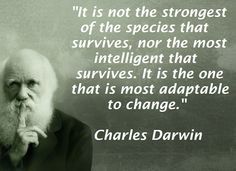 they often think that it means something like: The strongest survives. But that is not correct at all. The correct translation sounds more like: The most adaptable (or flexible) survives. So, it has nothing to do with strength – but with adaptability – to do.

Well, then we became that bit smarter.

But what can this be used for in our daytrading?

Adaptability is important in daytrading

My personal experience is that the more I practice listening to the market, its direction, its players and then adjust me, the more success I get with my daytrading.

The biggest losing trades in my long career as a daytrader have been those in which I stubbornly held onto an idea about what the market ought to do. I have tried with simple cruelty to win over the market by stubbornly sticking to my losing positions. It’s both a stupid and expensive strategy. Instead, you should adjust to the reality that appears on the screen, bury your ego, and realize that the best thing to do is observe the market and adjust accordingly.

The oil price’s steep decline at the end of 2014

Oil is one of the raw materials that are being speculated in a lot. As it cost over USD 100 per barrel in 2014, there were no analysts with respect for themselves, predicting a price drop of over 50%. The fact is, however, that the oil price since then has fallen sharply. The interesting and relevant question in this regard is how early the fall in prices could have been spotted if you had been flexible and observing to the market.

As we can see above, in September 2014 the oil price broke an upward trend line, which had been a support for the price for several years. Could you at this time have predicted that the oil should fall below USD 30 per barrel?

The trend was obviously broken. That was exactly the fact that the flexible investor, swing trader and daytrader should relate to. However, in the months following the fall, many large analyst houses began to predict a rapid turn in the oil price. It just did not happen.

Personally, I’m not wondering how far the price should go up or down. As long as it complies with the prerequisites for a trend, I invest in the trend direction and market conditions.

In March 2016, oil prices rose through the long downward trend line. Here we cautiously began to say that you should look further for long positions in oil – rather than going short. 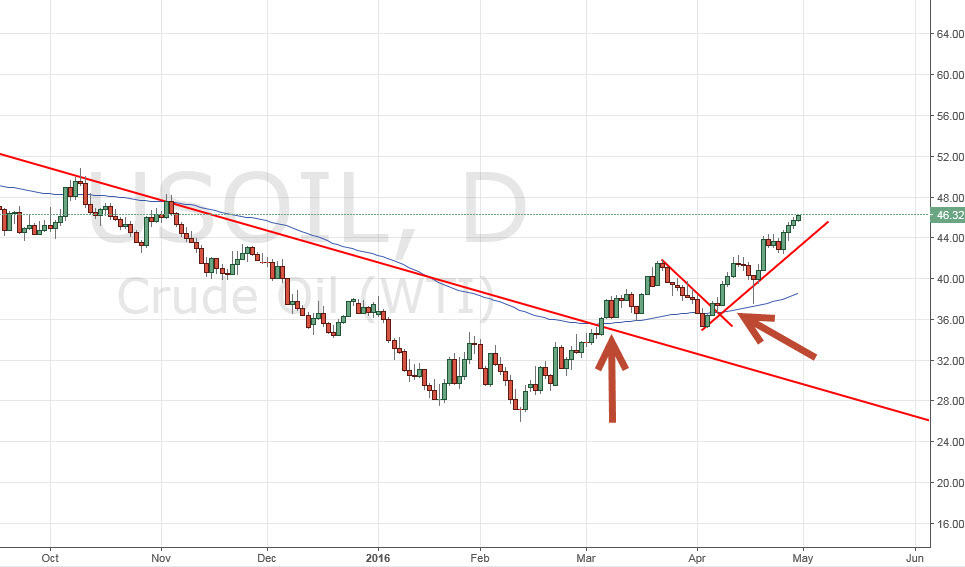 You can use many different strategies in such cases. Someone trades aggressively on the actual breach. Others are waiting for a retracement in the prize and go long for the next break. But if you are a daytrader, these contexts can be very important to keep in mind.

Personally, I have not heard any analysts, who in March 2016 predicted a price increase of 25% within the next month.

But the observant and flexible day trader would have seen the shift on the day chart and then maybe zoomed down on a smaller timeframe and timed the trade after the overall trend of the market.

This could have looked like this on the 1-hour chart:

Here are some potential trades on the 1-hour chart, where you could have the daytraded with profit by leveraging in on the overall trend.

Can you use fundamental factors in daytrading?

In such cases, we do not deal with oil stocks, OPEC meetings, abolition of embargoes, etc. We are looking exclusively on the market and maintain an openness for change.

Including fundamental factors in your daytrading can greatly improve your performance, but it can certainly also lock you in some notions of the market that make you much less flexible and adaptable.

In our daytrading, we are completely out of the market during the news. We do not trade during the news – or try to wonder what we think the news means for the prices. We look at the chart, keep us flexible, and daytrade in the direction of the trend.

Well then, is the price of oil going up or down from here?

We have no idea about that. We are daytraders in the Darwinian sense, where we do not try to win over the market with simple strength, but in return try to win by keeping ourselves flexible and more adaptable than the other players in the market.