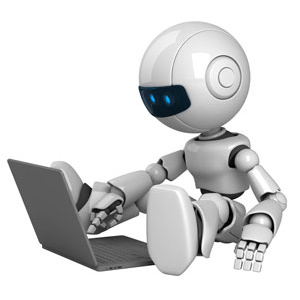 Algorithm trading and so-called robot trading, where you put a computer to trade automatically on one’s account based on a specific algorithm, is a frequently debated topic among daytraders.

There are both pros and cons of these trading robots. In this article we will try to review the various aspects of this kind of daytrading.

No matter what, it’s not wise to trade based on feelings and gut instinct. In this regard, algorithmic trading has an advantage. Once the computer is programmed with a trading algorithm, it does not matter what happens. It does not affect emotions and the like. It simply follows its program.

Another advantage of robotic traders is that a computer is not limited by one market or one timeframe. It can basically operate 10 different markets 24 hours a day as long as there is power to the machine. The machine does not get tired, hungry, frustrated, going to the toilet, etc. You are therefore not going to spend a lot of hours in front of the computer.

So if you have found a stable trading robot, so you can just put the money into an account and put it into action.

BUT – and of market there is a big but – there are definitely some cons of the automated robottic trade. Because if it really was so easy, then all the people in the world would just put the savings into a broker who then turned on the robot and made us rich.

There are thousands of different trading robots if you search the Internet. Most would like to give the impression that they have found the Holy Grail that can ensure forever profit in the market.

One of the disadvantages of many of them is that they are so-called Black box systems, where only the owner of the system knows the method. It makes it hard to assess how robust the method really is.

But two important things to look at with all robots are their history and their back tests.

Most systems have a so-called back-test, where you can see how the system has performed in the past. The problem is unfortunately that if it’s just a back test done in the present day, where you’ve tested what-if-scenarios, you can sit down at the computer and try out hundreds of strategies and find the one that would have earned a fortune in the past. This may give some assurance, but the problem is that it is not certain that the method continues to perform as well in the future.

So when looking at these system results, you must also ensure that they have been actively trading real money in the market for a minimum of one year and for a significantly longer period of time. Because it’s only when the system is allowed to trade in real time that it is revealed where durable algorithms are in the long run. The longer the live test that can be displayed of the system the better. Oftentimes many systems see only 3-6 months of live trading, which is far too little. It is important that the algorithm is tested in not only rising and falling markets, but also under conditions where the markets trade sideways with small fluctuations.

When you sit and look at this back-test and live-test, there are several numbers you can keep an eye on. Most people look only on the column with returns. Here you can see what the system can earn per day, week, month and year. When we talk daytrading robots, most people go for a system that gives 2-8% a month, which is quite a lot. We all want to be millionaires in a hurry, and with 5-7% in return a year, and with compound interest, we are doubling our money each year. So with that, we could all soon retire.

But in addition to the monthly return, it is also important to keep an eye on the column where there is “Max Drawdown”. This tells you how much loss the system has generated during its term. Now I have been looking at these automatic systems for years and most of them have a Max Drawdown in the area of 30-50%. This means that one or more times during the test term has had to sustain a loss of 30-50% of the total capital. With the test in hand it can be tempting to say that you can easily manage -50% if you only earn 5-7% per month. But those of you who have tried to lose 50% of your entire capital know how difficult it is when you’re in the middle of it.

When the human interferes

If you have a 50% loss on your account, it may be a bit tempting to start mixing things up. You can cut down on your risk, you can switch to a completely different system, you can start to trade against the system to protect yourself from loss, etc. But all this means just one thing, that the back-test is no longer valid. For this test, it was based on the premise that the system was allowed to run completely on its own. When you begin to change your mind, all the test material is right to the bin.

I often hear people say that the market is now almost purely robot trading, so ordinary daytraders are no longer sufficient. But although the robots are doing many trades, people still have feelings behind the computer. When these feelings begin to play in, people begin to mess things up in the engine room and suddenly human feelings will eventually become apparent.

The psychological problem of many of these systems is that they run quite a while with stable returns, which makes you used to these solid, high increases every month. When the market suddenly stings off or behaves quite differently than usual, the losses quickly accumulate, and unfortunately, the people behind the system easily panic.

When the market is behaving irrationally

Let’s look at an example of how a system or market suddenly begins to behave significantly differently than expected, which could result in major loss for the robots.

Below is an example of a very simple system. It is not recommended to use this method automatically, as most systems are also somewhat more complicated than this. But let’s look at it for example. 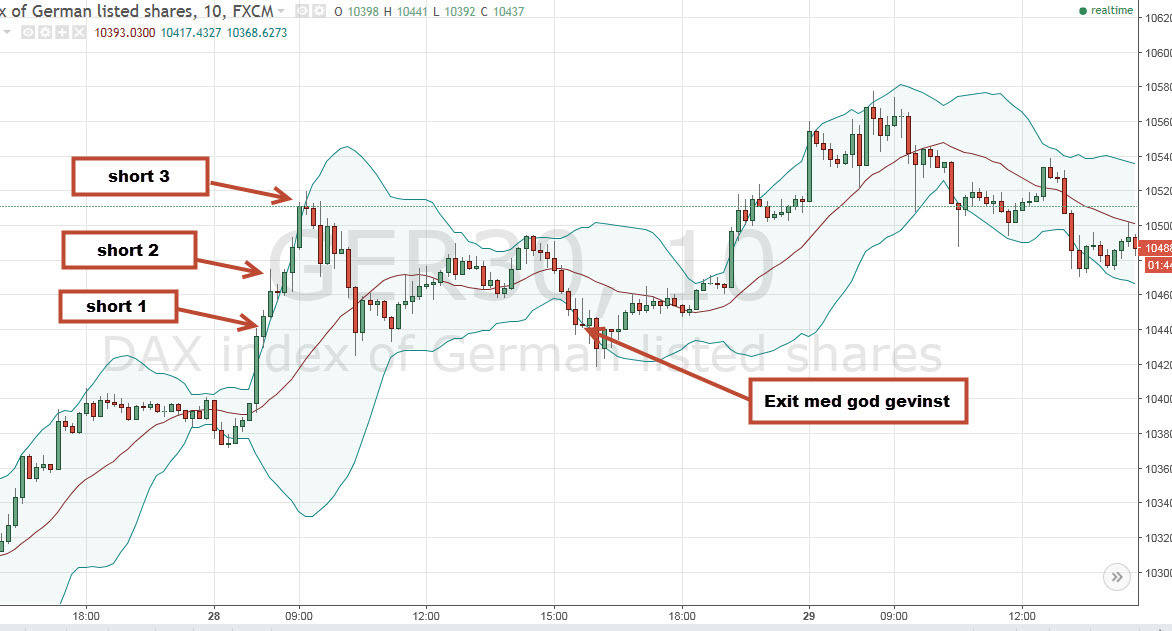 But now the market begins to fall, so our method says that we must go out of position when we hit the bottom Bollinger Band. It will take a few hours later, and we will end up with a good profit.

So far so good. But what if the market continues for a long time in one direction without the possibility of coming out? 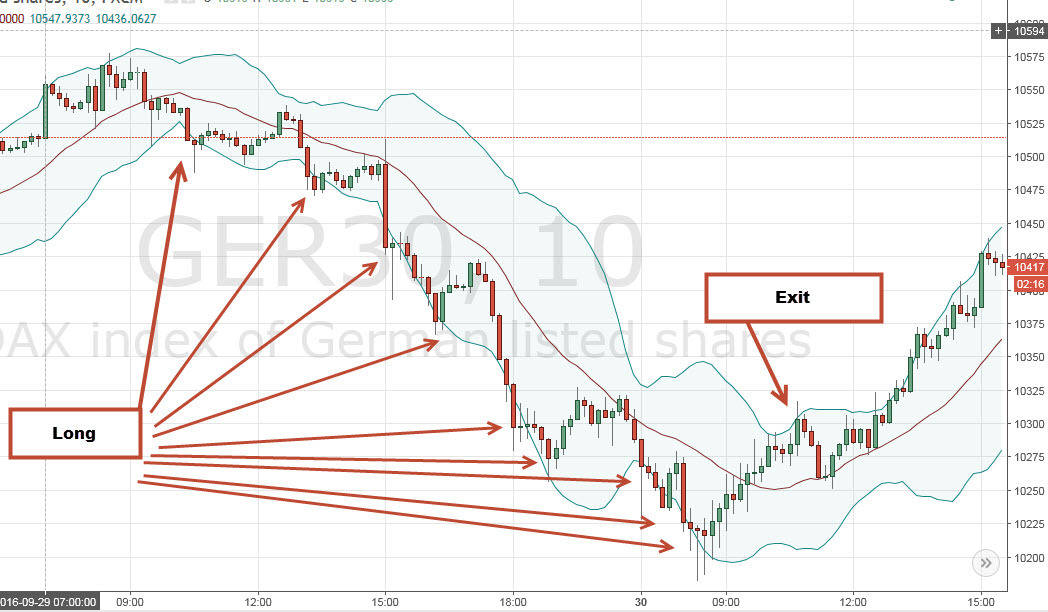 Here we see a very large number of long-trades before the market starts to rise enough to get out.

The example from DAX on the 10-minute chart was just a quick example among many, as it took me a few minutes to find.

Occasionally, we see movements in the market that last for days without a single opportunity to get out, so the system continues to add to a losing position.

Some systems start with one contract and then adds one contract to the next and so on. Others run a riskier model, which doubles for each time. One starts with one contract. When the trade goes against one, you will add two contracts next time and now up to three in total. Next time, four contracts are added and are now seven in total, etc. If the market continues to go against one, one can quickly get up to some size, so one’s account – and capital – can no longer bear it. This results in a so-called margin call from one’s broker, where all one’s positions are closed with a massive loss if you can not deposit extra money in a hurry.

Such systems are called Martingale systems and use the same principle as when going to the casino and betting on red. If it turns black, you will double your bet until you win. Such renowned Martingale systems can often run a long time with good monthly returns. But once things go wrong, the system completely collapses and all the money disappears.

As such, we are not opponents of trade robots and algorithm trading. But as a private daytrader or investor, you have to be extremely careful about which system and algorithms you choose, who controls it, how it is governed, etc.

It may also be a good idea to distribute your money to several different robots so that everyone’s money will not disappear if one system completely breaks down.

As with every other daytrading, there are pros and cons. You save a lot of time and do not have to learn everything from scratch. But, conversely, you assume a relatively high risk and also lose the ability to influence the results and the process yourself.

What is your attitude towards algorithm trading? Do you have experience with robotic trading? Please write a comment below.