What is a Daytrader? - DaytraderLand - Learn How To Make Money on Daytrading

What is a daytrader? Let’s start out by getting the terminology right.

The term daytrader comes from the fact that the trades in let’s say stocks, options, futures or forex are lasting within a day’s time and are often very short term. 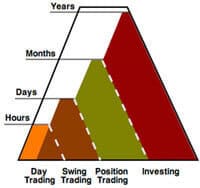 A daytrader is defined by a person who trades stocks, intstruments, certificates and so on, on a very short term basis and often with gearing (that is, fully or partially borrowed money).

Gearing means that if there is just a small price fluctuation on the instrument traded, it can result in a big win or loss on the trade – so to reduce the risk as much as possible, daytraders are only in a trade for minutes and up to a few hours at a time and never inbetween the opening and closing times as there is the risk of big and unforeseen swings.

Some daytraders make a few trades a day while others take hundreds of trades. It depends a lot on the strategy and the market.

A Daytrader always closes his trades at the end of every day, while a so called swingtrader keep the positions open for several days.


Click here to see our overview of the best daytrading platforms
Generally, there are three types of daytraders:

In our series of articles with Daytraders, you can read interviews on some of the personalities in the daytrading community in Denmark.